What is going on here? I’m beginning to think someone is using one of these on Cole Hamels:

Either that, or it’s the *gasp!* SI cover curse.

First it was the sore elbow in Spring Training, then he was hit by a liner off the bat of Prince Fielder last week, forcing him from the game. Last night, he turned his ankle while fielding a bunt by Washington pitcher John Lannan, and again had to leave the game. Just when he was starting to look like the Hamels of last October, too – pitching 4 1/3 scoreless innings with 4 hits and 4 strikeouts. His velocity and control were back last night, as well.

Fortunately, x-rays were negative and the injury was deemed a “mild sprain.” With tomorrow’s off day, there will be an additional day between starts, so the team is optimistic that he will not have to miss a start.

The Phillies won the game, 7-1, with Chase Utley hitting two home runs, and Pedro Feliz and Raul Ibanez each adding a homer as well.

Back to that voodoo doll. If some evil person out there (probably a Mets fan) is using one on Cole, they obviously have a better doll than I do. For example, if I wanted to give, say, Johan Santana a sore elbow before his start today, all I’d succeed in giving him would be this:

If I wanted to sully the image of Grady Sizemore or Jacoby Ellsbury, to the consternation of many of the female bloggers, I could try to give them hairy ears, but end up giving them this:

Or if I wanted to attack Manny’s manhood, I’d have somewhat the opposite effect:

For the record, I bought this doll many years ago in the BK days, while strolling through the French Market in New Orleans. If you’ve never been there, the French Market is a sort of open-air farmer’s market/flea market. Of course, I decided I needed a voodoo doll (doesn’t everyone who visits New Orleans buy one?) but obviously didn’t look at it too carefully. It wasn’t until later that I noticed it was filled with typographical errors. I guess there was not a lot of proofreading or quality control going on where this was made.

As I promised in yesterday’s comments, here is the other “fishy” picture of the Marlins, taken mere moments before Cody Ross gazed lovingly at his hands. 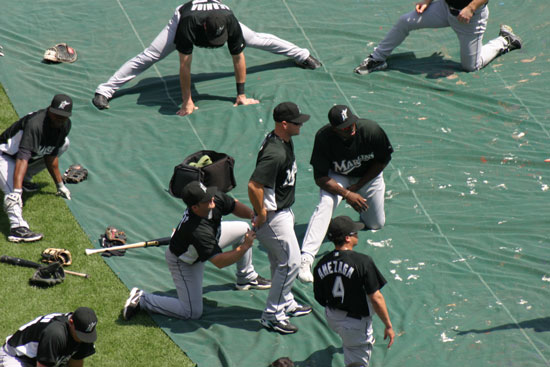 Note how the other players are dutifully stretching, while Dan Uggla is doing Lord-knows-what to Ross’s butt. Something needed adjusting? Was there a little TP hanging out? I’m just going to stop right now.

(all photos (except SI cover, obviously) by me)

Who writes this stuff?