The past week was a really busy one for me. In addition to seeing three different levels of Phillies (AA, AAA, and majors), my son had two baseball games, and the cold water valve in my laundry room broke, sending a geyser of water all over, and down through the floor vent into the finished basement. Fortunately, it broke while I was in the act of turning it on, instead of when I was unaware and off doing something else, so I was able to find the main shutoff valve without too much panicking and minimal water damage. On the plus side, the floor behind my washer and dryer is now cleaner than it’s been in years!

This entry is going to be a bit long, so please bear with me.

The IronPigs held the first of two Education Days scheduled for this month. Education Day just means that the game starts at 10:35 am, and there are lots of school groups in attendance. My own children were, in fact, at school that day; we just had lots of other people’s kids surrounding us.

As they were last year, the IronPigs player head shots were drawings by local school students:

Leadoff batter Rich Thompson looks very serious in this rendition. In need of a little Prozac?

Luis Maza, on the other hand, looks quite happy.

Has John Mayberry been getting the Michael Jackson treatment? He looks a bit pale.

Not a bad likeness.

Neil Sellers could be forgiven for going 0-for-4 today, since it looks like he might have trouble seeing straight.

Paul Hoover looks rather demonic. Hoover has just been called up to the parent club to replace backup catcher Brian Schneider, who is currently on the DL.

Brian Bocock, that is not a good batting average!

Drew Carpenter, hitless so far this year (he didn’t get one this day, either).

The IronPigs were hosting the Indianapolis Indians, AAA affiliate of the Pittsburgh Pirates. Drew Carpenter started for the ‘Pigs, giving up one run in six innings, striking out five: 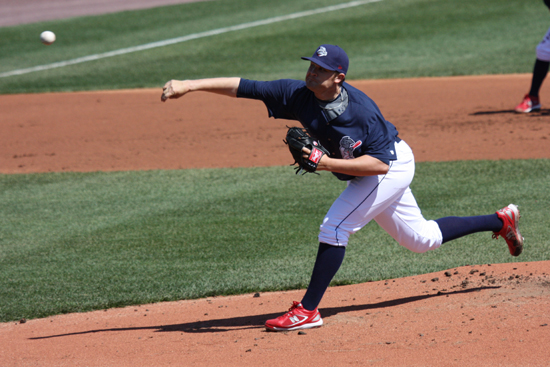 Carpenter was opposed on the mound by Daniel McCutchen (no relation to Andrew – obviously). He makes pitching look almost painful with this expression: 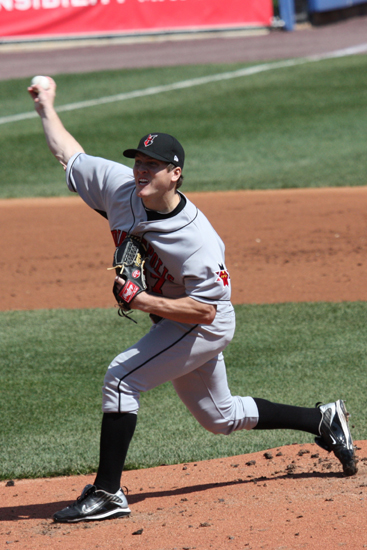 Paul Hoover is out at second, but the throw from Indians shortstop Argenis Diaz was not in time to turn the double play: 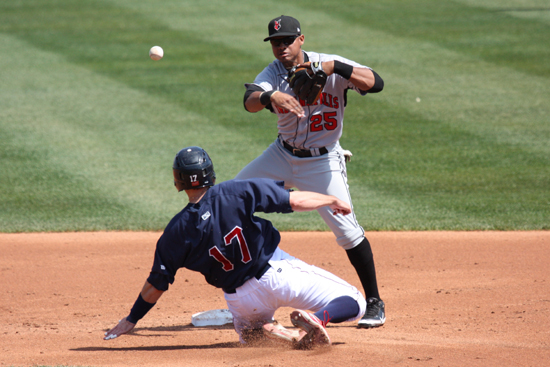 No IronPigs game is complete without the Pork Racers – Hambone, Chris P. Bacon, and Diggity: 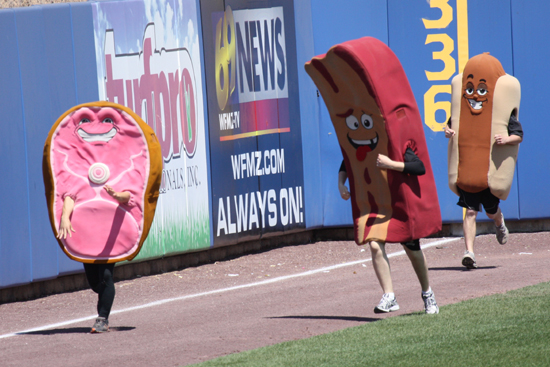 John Mayberry is safe at second on a steal attempt: 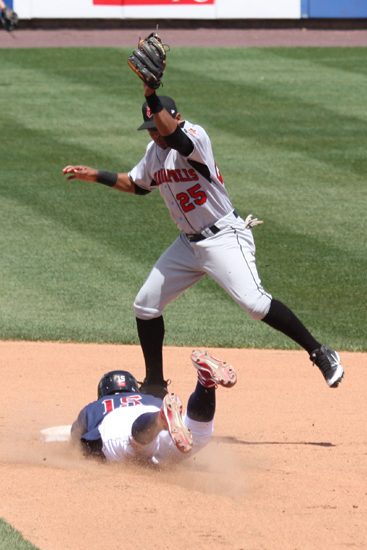 Mike Zagurski came into the game in relief of Carpenter. I recall listening to the radio broadcast of his major league debut a few years ago, when Larry Andersen described him as looking “a little Kruk-y”: 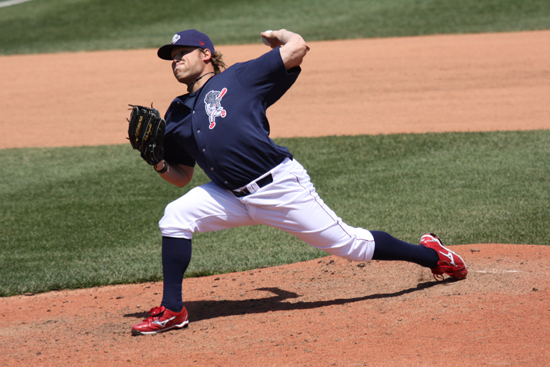 Antonio Bastardo was called upon to get the final out of the eighth inning: 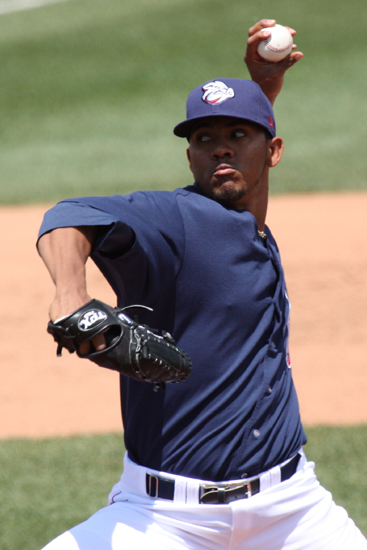 Scott Mathieson came in to close the game and get the save. Mathieson is attempting to come back from not one, but two, Tommy John surgeries. He looked pretty good, hitting 95 and 96 mph on the stadium radar gun (though who knows how accurate those are?): 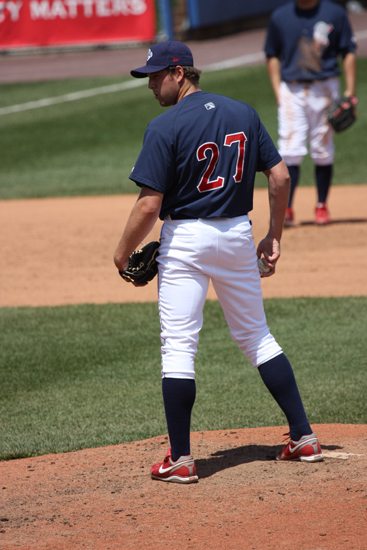 Wednesday, May 5 – Phillies vs Cardinals

Finally, my first Phillies game of the season! Not only that, but we had some amazing seats (thanks, Eric and Michelle!), just past the Phillies dugout in the fifth row. We missed the first inning, however, due to absolutely nightmarish traffic resulting from simultaneous Phillies and Flyers games. I hate when (hmph!) secondary sports like hockey interfere with my plans!

Nonetheless, with adult beverage in hand, we settled in for the start of the second inning. Kyle Kendrick was on the mound, and he pitched masterfully for seven innings, scattering six hits and giving up no runs: 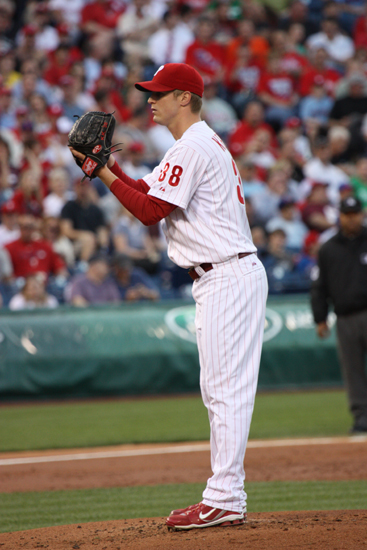 The Cardinals countered with Brad Penny, shown here rockin’ the high-socks look. The little white blur is the ball going past him: 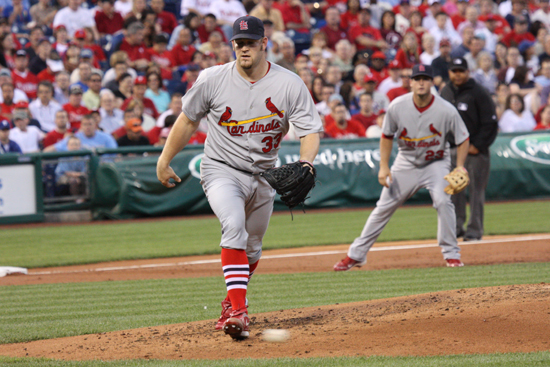 Brendan Ryan led off the third for the Cards, and was called out at first on this play: 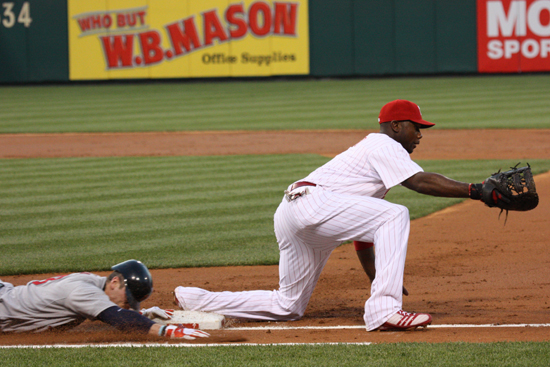 I think the Phils got a lucky break here, as it sure doesn’t look like Howard has the ball yet. This brought Tony LaRussa out of the dugout for the second time in the game. He had earlier come out in the second inning to argue Colby Rasmus’ being called out at third on an attempted steal. Unfortunately for LaRussa, both arguments were to no avail: 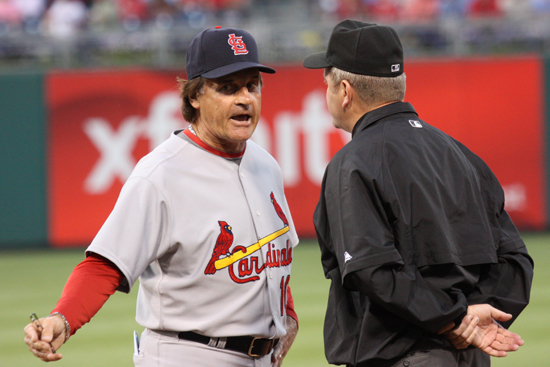 Placido Polanco got the Phils on the board in the fourth with a two-run homer. Shane Victorino was on base at the time, and congratulates Polanco as he crosses the plate. Victorino would also hit a solo homer in the sixth: 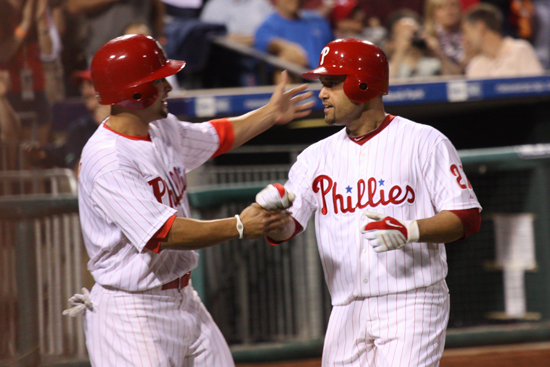 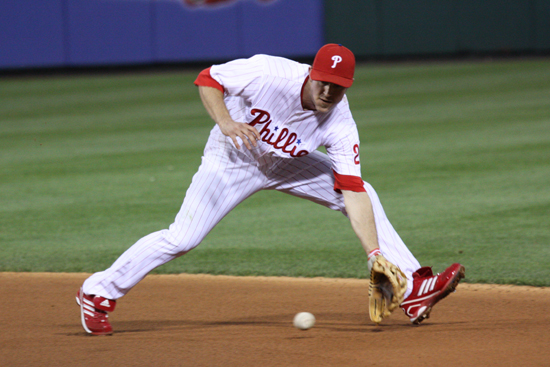 Cards third baseman David Freese tracks down a popup in foul territory. The expressions on the faces of the fans in the vicinity of the play are priceless: 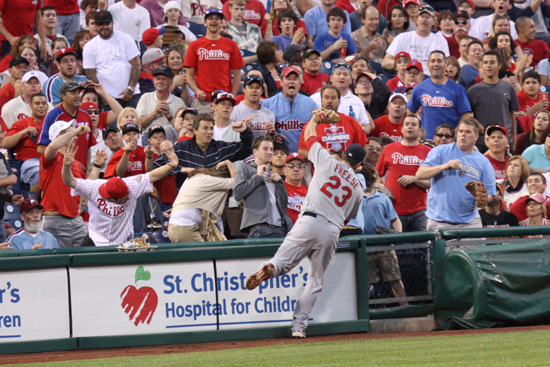 Is Albert Pujols pondering the Cards’ lack of offense in this game? The Phillies pitchers kept Pujols in check through the first three games of the four-game series, with Pujols going 3-for-13 with no RBIs: 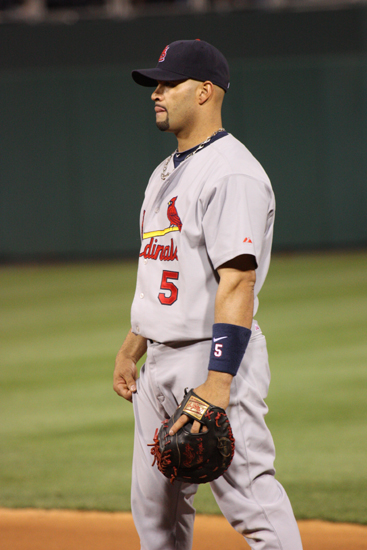 Chase Utley makes the pivot on a 6-4-3 double play to end the top of the seventh: 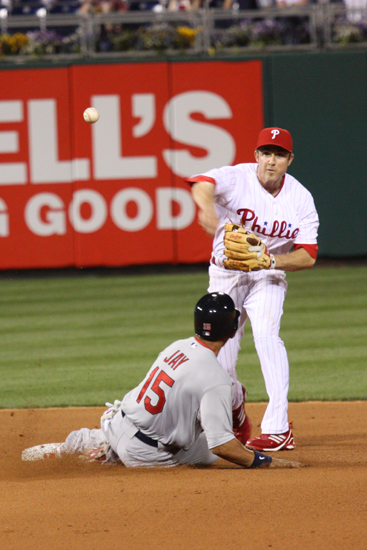 Danys Baez and Jose Contreras pitched perfect eighth and ninth innings, respectively, to close out the victory for Kendrick. 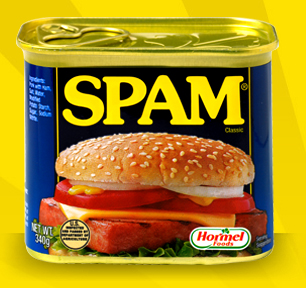 The Reading Phillies were holding their annual Spam carving contest this past Saturday. I had no intention of taking part in this, I just simply planned on snapping a few photos of other people’s Spam creations.

My daughter, motivated by the prospect of the $250 prize, had other plans.

At her urging, I handed over the $5 entry fee (proceeds benefitting a charity called Opportunity House) and we received our can of Spam. What to carve? I was a bit unprepared, as I’ve mentioned, this was not part of my original plan. We decided upon the R-Phils mascot, Screwball.

Step one: figure out how to get the Spam out of the can intact. Eww. My experience with Spam ended many years ago during childhood, when my mom would occasionally serve it. I have never willingly touched Spam since then.

Let’s just say it’s a bit, um, slimy. Best not to think about what’s actually in it. It’s also not the easiest medium to work with. And after your hands are covered with Spam juice, it’s not easy to control your carving utensils (a plastic knife and toothpicks).

Anyway, here is our entry, “Spamball”: 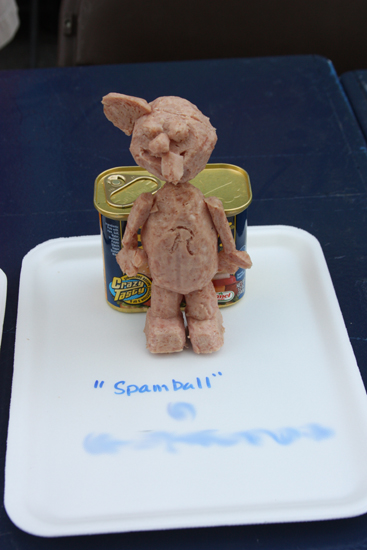 Here’s the real Screwball for comparison: 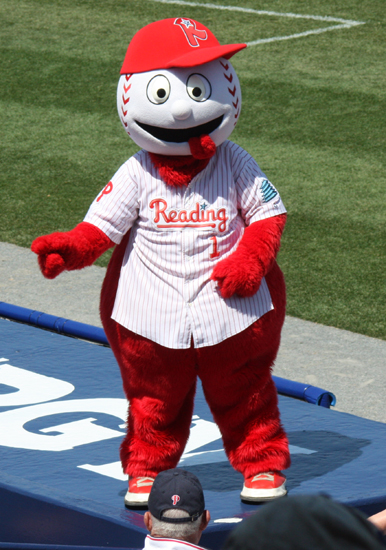 OK, so not a perfect likeness, but like I said, Spam isn’t the easiest thing to work with. 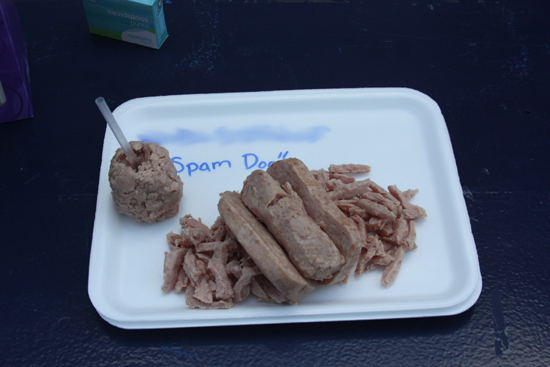 These two contestants are working on separate halves of what would eventually be the winning entry, “Screwball’s Spamtastic Opportunity House”: 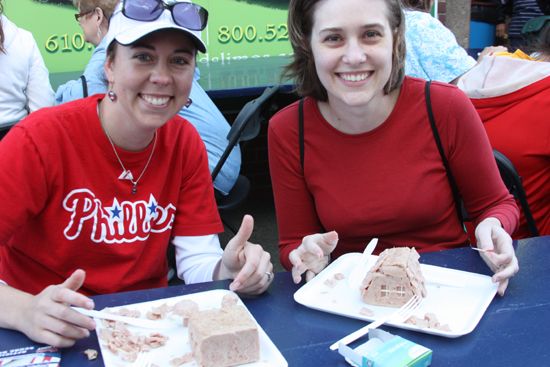 Prior to the winner being announced after the seventh inning, judges narrowed the entries to six finalists. Ours was one of the six! Fans then cast their votes for their favorite. The finalists got to walk out on the field accompanying their entry. Sadly, I do not have any pictures of this, since I was on the field and couldn’t very well take a picture of myself.

The winners, pictured above, got the cash, and the rest of the finalists got a cap and t-shirt as consolation prizes. My daughter claimed the cap, since the shirt was extremely large and would have looked like a dress on her.

I only managed a few pictures of the game, as it was incredibly windy and cold, making it hard to hold the camera steady. 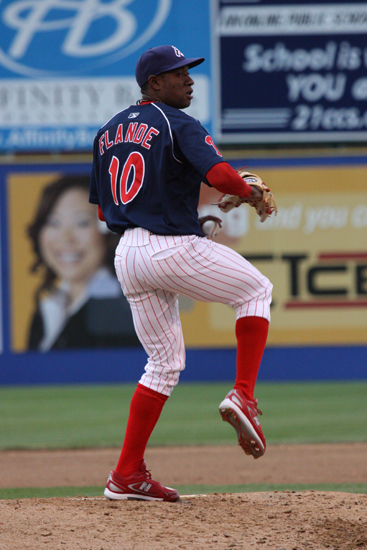 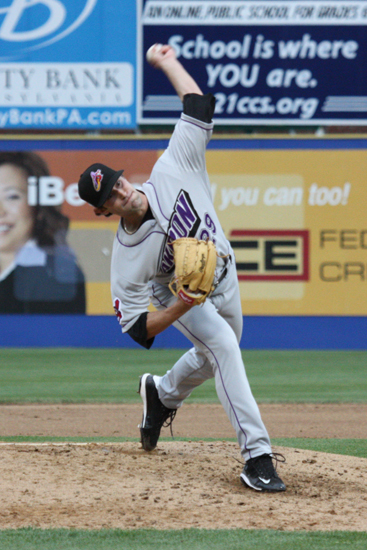 R-Phils centerfielder Quintin Berry reminds me of a t-ball player who needs to use the bathroom: 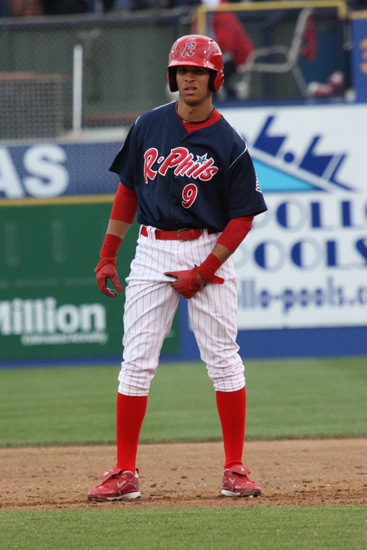 The R-Phils lost, 5-2, though we left before then since it was so windy and cold. The kids didn’t even mind missing the post-game fireworks, they were so uncomfortable.

Whew! Now I’m caught up. Hope to be blogging more regularly this month.

(all photos by me, except the can of Spam)

Who writes this stuff?